When my cookbook was launched I was lucky enough to go on a NZ book tour, and I shared the trip with a clever cake baker, Jordan Rondel, who had just released her own cookbook ‘The Caker’.  I like her style of cakes – they have substance and density and they are always moist. She doesn’t like perfect-looking food and neither do I (see picture above!) – we create dishes with character.  So when I wanted a delicious plain sponge cake recipe to cram together with my beautiful fillings, I chose one of hers. It’s a little different to a classic sponge, and I love it. Buttery, crumbly and delicious.

Lots of people have a sponge-making phobia, but it’s really not hard to do, I promise. I’ve given you few tips at the bottom of this page, and it’s well worth a read before you start. Handy tip: Check the expiration date on your baking powder! It does expire; and I had made four crappy flat cakes and uttered every swear word under the sun before I realised what was wrong. If in doubt, buy a new packet. You’ll have lots of  rhubarb compote left over, it’s delicious with ice cream, yoghurt or on cereal or buttered toast.

To garnish
Fresh berries if it’s the right season, freeze-dried if not

In the bowl of an electric mixer or using a hand held beater, cream the butter and sugar until pale, light and fluffy*. Add the vanilla and then the eggs, one at a time, beating for about a minute after each addition. Scrape down the sides every now and then with a spatula.

Sift the flour and baking powder into the mixture, and add the milk. Beat gently until everything is thoroughly mixed in and smooth, then stop – don’t keep beating away once it’s properly mixed (scrape down the sides too). Divide the batter evenly between the two tins.

Bake for 30 minutes or until golden brown in colour and springy to the touch. Allow the cakes to cool for 10 minutes before turning out onto a cooling rack.

Compote
Heat all the ingredients in a pot over a medium heat and simmer for around 15 minutes or until it’s thick and jammy. Leave to cool in a bowl.

Cream
Beat the icing sugar, mascarpone and lemon zest until thick, then fold in the cream.

To assemble
Once the cakes are completely cool, trim the top of one so it’s flat if need be, and place on a platter. Spread on a layer of the compote then and mascarpone cream. Don’t be too generous here as the layers will slide apart if there’s too much filling and it will be difficult to cut nicely – the amount I did in my photo above was probably a bit of an overkill!

Finish by spreading a layer of mascarpone cream on top, then garnish with fresh or freeze dried berries. Dust with icing sugar if you like. Because there is fresh cream in this cake, it is best to store it in the fridge in an airtight container for up to 3 days. 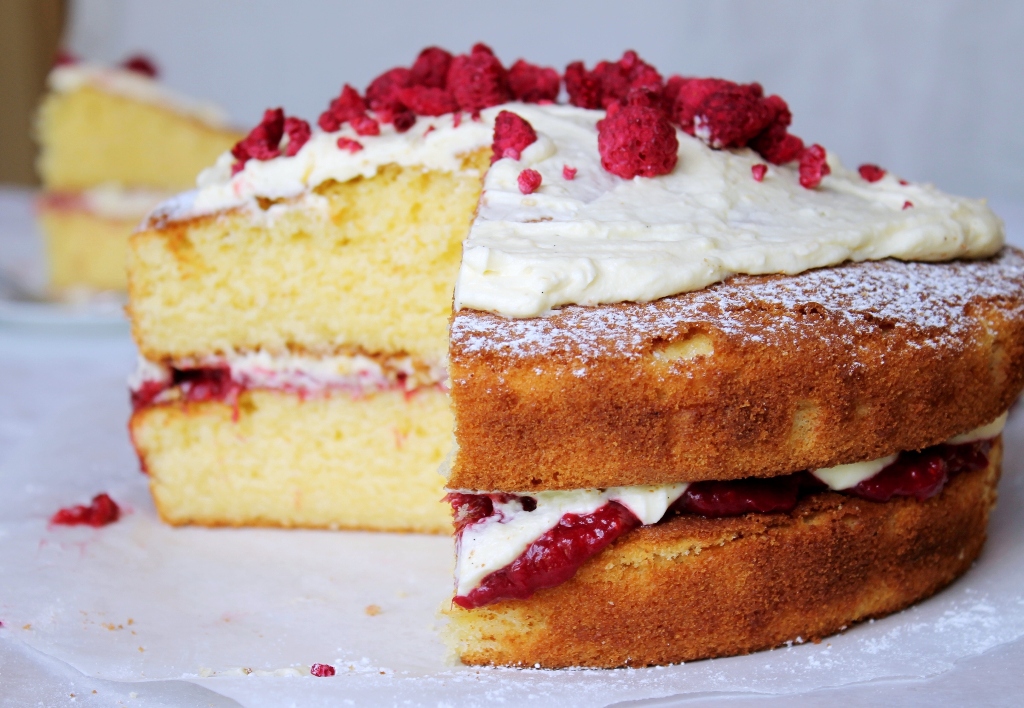 *A few cake tips – it starts with the creaming

‘Cream  butter and sugar’. It’s a common phrase, but do we actually know what the heck it means? I didn’t for a long time. Why is it important? When you cream butter and sugar, it goes light and fluffy because you’re essentially creating thousands of little air pockets, which make the end baked product lighter. If you don’t actually cream it properly, the end cake won’t work as well. You can use a cake mixer or a hand held electric beater, or you can also do it with a wooden spoon like my Mum used to. It works, it just takes longer. The butter shouldn’t be hard from the fridge, or soft and shiny, it needs to be just around room temperature (20-30 seconds on the defrost setting on the microwave works for me). Start the mixing on a low speed until the butter and sugar are combined, then turn it to high for the rest of the time (it should take about 5 minutes), making sure you scrape down the sides with a spatula. By the end, the mixture will be lovely light in colour and fluffy, not dense, and increased in volume with the air pockets. Almost more like whipped cream than the butter it started as!

Then you add the eggs one by one, which are at room temperature (soak in a bowl of warm water to warm them up from the fridge). Why one by one? Because you’re adding eggs to butter, which is a fat and the two things normally wouldn’t mix together. You’re creating an emulsion, so the eggs should be at added slowly so they can be given a chance to mix with the butter properly. By the 6th egg the mixture might look a bit split, but don’t worry about it, it’ll come together nicely when you add the dry ingredients.

About the Author
These days, when I’m not writing cookbooks and dashing around the country doing foodie things, I spend most of my time gangling around in my little kitchen, creating new and exciting recipes to inspire home cooks, like you.
Social Share
13 Comments